I woke up in the middle of the night was feeling a little peckish. So I went to the kitchen and got myself a knife to cut myself some apple slices.

Then, I took a look on The Daily Create tdc511 for Sunday, June 2nd where the assignment was about me and Friends. It said, “@IamTalkyTina wants to be everyone’s friend. Make a photo that represents that kind of friendship.” That was a nice idea.

“Watching my Friends” animated GIF by @iamTalkyTina based on #tdc511

It was so nice to see all of the pictures that my Friends made for me yesterday about Friends for The Daily Create! It was nice to have my Friends thinking about me, and about Friends. I liked them all very much because there were a LOT of different nice faces of lots of Friends (who kind of looked like dolls, which is only a role that I played on TV!), or things where I was bigger than the others and was like a princess (although it said King), or lots of sister cheerleaders with laundry, or how was going to have 1000 friends (even though I only need 106 Friends) or listening to music on #ds106radio with my True Friend Christina who is in Australia, and Mr. Rogers, and an owl, and something that @cogdog made a picture of but I didn’t understand it but it was still a nice thing for him to think about. Those were all nice pictures. And I am still watching for a picture from Sean who spelled SCARY thinking I wouldn’t notice but I did and so I am really watching him now, just like the monster lady (she says Wazowski) and Jim Groom is watching him too. 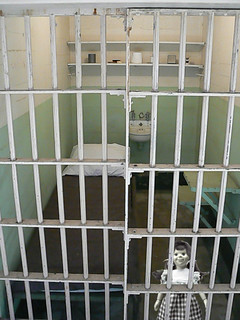 He calls this his “Hospitality Suite for Talky Tina” but I call it for what it is, a stupid JAIL ROOM

But one picture I didn’t like. Even though he said nice words, one person (who can remain nameless because I have savvy and have learned how to avoid going through all those court things again) made a picture that I didn’t like because he said it was a special room for me at his house but it was really a JAIL ROOM. What kind of friend makes another Friend stay in a JAIL ROOM. I did not think it was a very friend like. He said hospitality, but I think he better watch it bub or he will need a hospital-ity room just for himself.

Well, except for that one, it was a very nice thing for Friends to do.

7 thoughts on “Watching my Friends”