HEY! Tumblr! I’m calling you out!

Then @mbransons says he got my GIF to work by making it only as big as 250×333 pixels which it pretty small, even for me. Like, I already made it smaller to 500 pixels wide. At some point, there is no point in posting Art if you need a magnifying glass to see it. You can see how big the image is at 250 pixels wide in the samples below. Rather than living with 250, I tried some other options.

This morning I tried keeping it the same size but made the colours not so deep and I actually got an image to successfully post on Tumblr but it only had 2 colours and you could not see a thing, so that was a bad result. I added this little message just now to it didn’t look so boring.

Next, I tried saving the image with 4 colours. It was a little bit better than dog barf, but not really because it looks like dog barf. Especially all of that lovingly salvaged and extended-with-the-clone-tool original background. Beautiful dog barf.

So NICE at 4 colours.

Then I found more about how if it has TOO much MAGENTA or if it has TOO much PINK then try changing them with adjustment layers but that makes the colours all wonky and even although there were other more suggestions, I decided that I just don’t have all day for that.

Ain’t Nobody Got Time for That!

and so then I made a comic book kind of one but even that did not post successfully to Tumblr at 500 pixels wide.

Redone, without the original background.

so then I decided it was too much of a waste of Art Time to figure out the Tumblr rules so I spent my time making my invitation to meet Tumblr at the top of the stairs to see if we can’t work this out, once and for all. Because it is silly to waste Art Time. I don’t know if Tumblr will meet me at the top of the stairs but if they do, this will get sorted out, ONE WAY or the other. 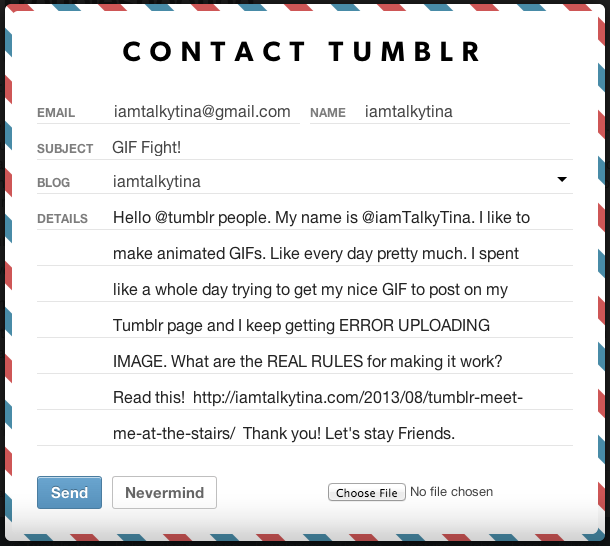 My polite inquiry to Tumblr

What Tumblr Said Back

We love gifs too, but can only support ones that are smaller than 1 MB and less than 500 pixels wide. To cut down on file size, try deleting a layer or lowering the contrast of your gif. Too much saturation or allowing more than 80 layers/frames can also prevent your gif from uploading, so try reducing those as well. If none of these suggestions work, email us your image file and we can test it over here.

I am glad that you like GIFs too. They are a fun thing for Friends.

Thank you very much for sending me a response to my question. Maybe you didn’t read my blog post and perhaps you did not see that I DID attach my file to my inquiry? I was hoping you could look at it and tell me the problem. I will send it to you again with this email, and again direct you to read my blog post about this problem at https://iamtalkytina.com/2013/08/tumblr-meet-me-at-the-stairs/ where I wrote about some of the different things I tried over the last 24 hours.

1) you say you support GIFs that are smaller than 1 MB — this one is only 494 KB
2) you say the GIF must be less than 500 pixels wide. Is that 500 pixels wide or less, or do you mean 499 pixels wide or less?  The GIF IS 500 pixels wide. Should I make it one pixel less in width (499?) to make it work?
3) You say that MORE than 80 layers/frames is a problem. My GIF only has 57. Shouldn’t it work?
4) You talk about too much saturation or lowering the contrast of the GIF. These terms seem VERY vague and do not provide much in the way of direction. Can you be more specific about the necessary characteristics of the file? Are you referring to colour depth here? 256 colours? 128 colours? 64 colours, etc? Specific colour tables? Are you talking about colour reduction algorithms (perceptive, selective, adaptive, restrictive?)  I tried waving my hands around in the air and fiddling with different options in the Photoshop Save for Web dialogue and got nowhere.

We need clearer direction here. This cannot be just a hit and miss process. In my blog post I reference a number of sites that offer suggestions for getting animated GIFs to work on Tumblr, and I have tried their suggestions. It’s still a mystery.

I know that you will want me and all of my True Friends to be able to put our GIFs on Tumblr. A lot of us have no problem putting them on our WordPress blogs, and apparently you use the same ImageMagick engine that WordPress uses. Can you fix yours so that it works like the one we use in our self-hosted WordPress blogs?

Again, I am attaching my file to this email, and also suggest you look at https://iamtalkytina.com/2013/08/tumblr-meet-me-at-the-stairs/  to see what I have tried so far.

Okay, Tumblr, it is your turn again now. Please answer my questions this time. And look at my GIF. And read this blog post.

I was also unable to test post that gif file.

We have done some updates and changes on Tumblr. These changes could have affected the way we accept GIFs to be uploaded to our servers.

Could you try a couple things for us, to see if that helps with your issue?

Try lowering the amount of colors you are using (around 64 seems to right number right now).

Try shortening the delay on each layer, sometimes even a 0.01 seconds can make a difference (depending on how many layers you are trying to use.

Thanks for helping us troubleshoot. We realize that it might take a little time, but the more information that we have, the faster it is for us to help you.

FINALLY! I get a version of my GIF to post on Tumblr

Well. What a battle royale that was! After spending a considerable amount of time applying ALL of David_S suggestions, I managed to get the dang GIF to successfully upload to Tumblr.

The GIF accepted during the final Tumblr upload attempt looks like this.

I dunno. Somehow the original seems to have a bit more umph to it than the pale shade that Tumblr accepted. I had to scale the size down (I went to 498 pixels wide), threw out over half the frames, reduced the colour depth to 64 colours, decreased the frame intervals to a rather fast .08, and in the end, the file was only 253 KB.

IT STILL SEEMS LIKE WAY TOO MUCH TUMBLR VOODOO, fiddling with a whole whack of different variables until the GIF is accepted. It would be nice if Tumblr could instead post some specific details on what makes a GIF upload acceptable or not.  I certainly don’t want to have to fiddle around with future GIFs as much as I did with this one. If there were one specific factor that was making this particular GIF problematic for Tumblr, it would be nice if that one specific factor could be identified. As stands right now, I had to fiddle with too many different variables.

2 thoughts on “@Tumblr, Meet Me at The Stairs!”