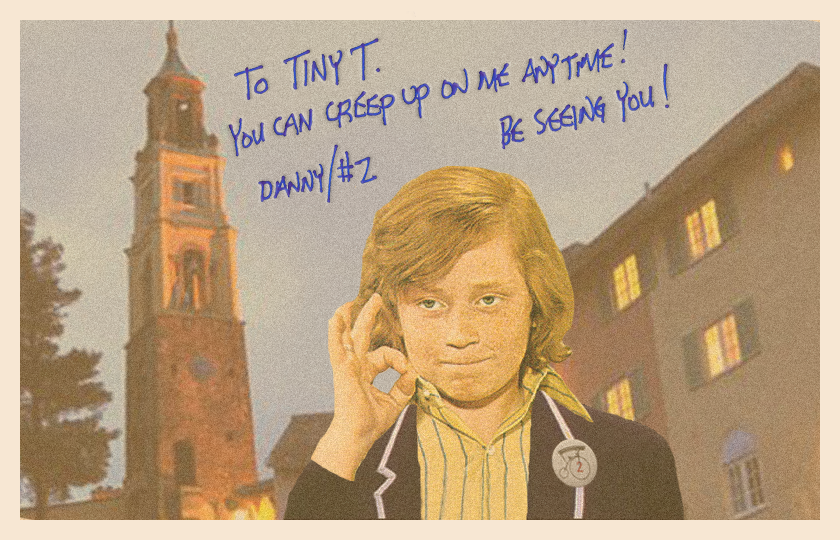 “Danny was a Smooth Talker,” photo from @iamTalkyTina archive

I had all but forgotten this little gem until Geoff Cain (@geoffcain, on Twitter) triggered some memories this evening that had been pretty much buried in the muck of the sands of time. Geoff’s prisoner106 Book Cover “The Partridge Family #4 Meets The Prisoner” reminded me of the time back in the 70s when The Partridges were let loose in The Village. I recall it well because it was the third (or fourth?) time I was called into The Village to do some security consulting and to pick up the pieces (again) after yet another Number 2 meltdown.

Keith and Laurie were happy enough hanging out on the beach, playing guitar and singing. Shirley and Reuben were easy enough to keep track of — they were in the Castle restaurant most of the time, or sitting on the patio enjoying the view and the Bloody Marys. Chris (the second one) and Tracy didn’t get into too much trouble, and it was before Ricky came along, so I didn’t need to worry about him. But Danny was the character who gave me the real headaches. He somehow managed to take advantage of the power vacuum and got himself installed as Number 2 for a few days until The Committee and the Residents got wise to him and the replacement finally arrived.

Let me tell you, I earned my consulting fees on that trip! Danny was even so presumptuous as to get his own glossies printed up by the Tally Ho press, and foisted them on anyone who would take one. As you can see, despite all of my run-ins with him, he couldn’t even take the time to get my name right. AND he used the Mean Word at me. He was only a True Friend of Me in his own head.

2 thoughts on “Danny Was a Smooth Talker”