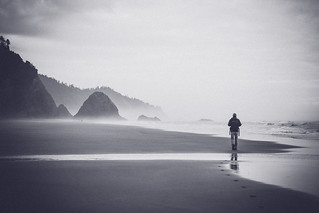 Some of my friends (Christina and Melanie) were wondering about me on the Twitter last night and this morning. They hadn’t heard from me for a while and were starting to get worried.

Everybody needs to know that despite my size, I am a big girl now and certainly I know how to take care of myself. You don’t need to be worried about that. I learned how to do that long ago.

I also learned that sometimes it helps to travel incognito, and quietly, if you know what I mean. Some times people don’t even know that I am right there. Which can come in handy at times. But if I want you to know that I am there, you will know!

I am not sure, however, that my True Friend @scottlo got my message about meeting him at the beach. I saw him talking into his phone, but I know that sometimes that stops his Twitter from working, and so he maybe didn’t know that I was there to see him. I tried waving at him when he took this picture, but he didn’t wave back, so I don’t think he saw me. I guess sometimes it helps to let your friends know you are coming for a visit in advance.

“Waving to @scottlo at the Beach” animated GIF by iamTalkyTina

Anyway, even though I didn’t get to see @scottlo up close, and I had to catch my flight back home before we could meet, it was nice to be at the beach.

So now you know where I was.