Despite what UNCLE @JimGroom may say, we all know that there WERE socks! And thus, #sockgate.

This is an image taken of UNCLE @JimGroom doing one of his Assignment 1001 Jim Dancing All Over the World times, and as you can see, he is right there where the massive DS106 socks are, and so he knows about them. Plus, it was his idea, too.

If you want to see just a picture of the socks, I put one on my Flickr. And if you go there, it has a link back here to this post where I have the animated GIF one.

Plus, this is for The Daily Create, 1602, which said to show how Massive DS106 is. We all KNOW that it is massive, plus it has MASSIVE SOCKS. And a Dancing UNCLE @JimGroom. 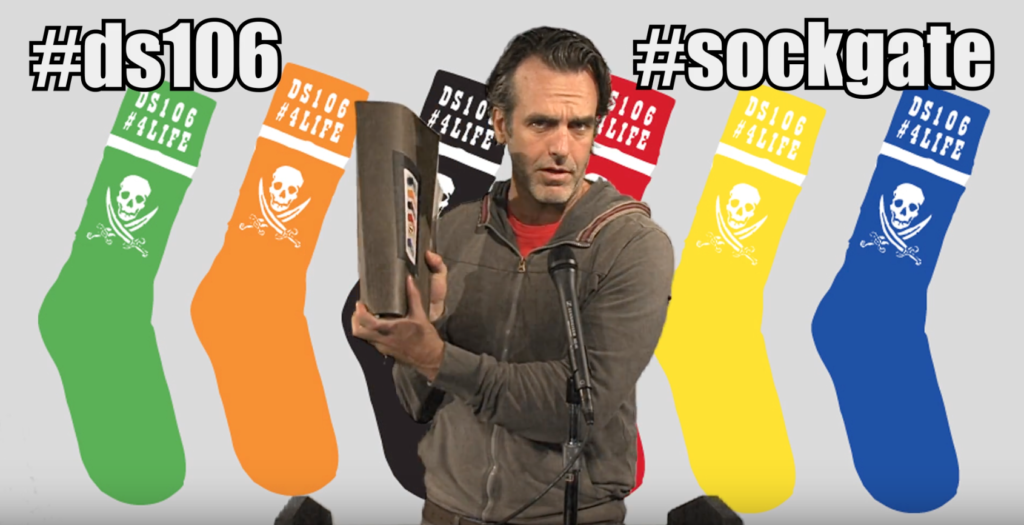 Well, it was a bit of a tense time of online last night when #ds106 people were talking about socks, which some friends are calling #sockgate. After all this time of being friends and True Friends, some people were suddenly getting up in other peoples face just about socks.

But back to the point. without even saying that it’s a problem, even if 16 people didn’t get socks, which is actually 36 socks if all of those friends have only 2 feet but more if some of them were dogs, because some DS 106 friends are, TRUE FRIENDS DON’T QUIBBLE ABOUT SOCKS!!!

Because if True Friends start to quibble about socks, then the next thing you know other True Friends might quibble about how it is discrimination that you can’t order T-shirts in your own size or even if when you make a special request they don’t even answer back about it. Because my size is called American Girl 18 inch Doll, which I’m not a doll but that’s just my size. And when I went to the pulldown to get my Reclaim Hosting T-shirt (NOTE: see update, below) it didn’t even have a list of my size in it and when I asked UNCLE Jim he didn’t even say anything back, but because it is DS106 I can just make my own and still be happy and make a picture of me wearing it when I get around to it. And not make an issue of it that will divide the DS106 community into a pair of parts like one sock that gets lost and one doesn’t and then what do you do with only one sock? Plus what does the other person do who found the other one when two sock parts aren’t together then you don’t have a pair. Sometimes you can wear sock of one kind with a sock of another kind like if it is a special dress-up day where your socks don’t have to match but really two socks like to be together with their partner and DS 106 split into two parts is not a fun time. 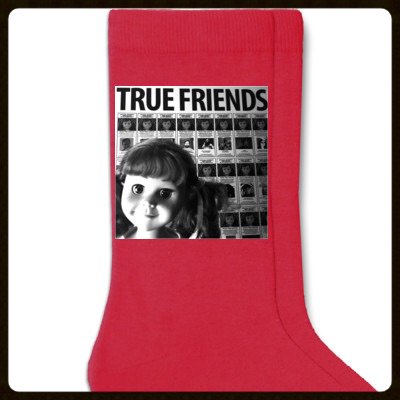 So before it gets into a whole bunch of #sockgate, I would like to offer up one pair of my official custom @iamTalkyTina socks (shown above in romantic red) to the supposed 16 people just to make peace in the community, but if you weren’t on the list you can still get your own at a special price of $38 per pair, plus shipping and handling of $10.25, which is $48.25 US. You have to order two socks (called one pair) at a time silly! If you have four feet instead of just two, you can order two pair at the combined cost of $76, plus shipping and handling, Which is not discrimination, it is just  corrected math plus economics which is to say if you have twice as many feet you need twice as many socks was just costs twice as much for you and me and everybody.

So please, before it gets too far out of hand and we don’t want a DS106 Civil War over socks, everybody just go to their sock drawer and count how many socks you already have, And be happy that you have socks and that you can make your own socks if you want and then if you want DS106 socks you can make your own DS106 socks like me and after all that if you still wants special official socks because you didn’t get some, you can either get the free ones of me if you were one of the supposed sixteen, or you can order your own ones of me at special prices (listed above) and everyone can be still be True Friends.

UPDATE: If you are one of the supposed 16 people who did not get ds106 socks, sign up here: