My favourite drink that I like to think reflects me (rather than defines me) is called Two Swift Kicks for an Ass’ Neck.  It is a variation on a historic favourite known as The Horse’s Neck (and The Horse’s Neck with a Kick) and here is the story of it.

The original Horse drink is kind of unique in that it is usually available as both an alcoholic and non-alcoholic variation. Without getting into a long tirade about my continually youthful appearance and my compact vertical proportions, let me just say that there have been times when it has been beneficial for the bartender to be able to appear to be serving me something that is in keeping with my perceived external looks, while at the same time being able to give me what I may actually want or need given my actual age or temperament at the time. Of course, during missions there are times when the opposite may be true, say if I’m needing to maintain my wits while undertaking hours and hours of libation-expedited negotiations.

I will confess that I spent many an evening practicing such tradecraft while visiting with Sir Ian Fleming himself at Goldeneye, and actually suggested the drink to him when he was writing a scene for On Her Majesty’s Secret Service — you know, the one in the airport VIP lounge where James Bond is disguised as Sir Hilary Bray? Remember how he goes in for a double brandy and ginger ale? That was my suggestion! 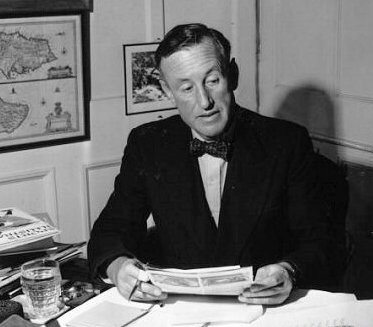 Ian Fleming, reading my suggestions for On Her Majesty’s Secret Service

Anyway, I remixed and renamed the drink in the early sixties shortly after I did that spot on The Twilight Zone. Telly was being a bit mean to me on the set (part what you see in the episode wasn’t acting on his part), and so the night before the stairs scene I managed to sneak in and swap out his ginger ale for something a little stronger. (For the record, all of this came out in the disclosure before the trial, and was all considered as coincidental and not influential in the final outcome. Plus, remember, it was just a TV show.)  But it was just after that when I renamed it in Erich’s memory.

The other stipulation that I have always made is to ask that the bartender to forego the traditional highball glass. I prefer the tumbler instead. That way, not only do I get to have a little chuckle about Erich and his little trip down the stairs, but I also get two drinks for the price of one! Hence, Two Swift Kicks for the Ass’ Neck is what they give me.

The bartenders know what I like, and if not, they never get it wrong more than once.