Contrary to a report that just started circulating on the Internet thing, HE is not ME! He is NOT @iamTalkyTina and I AM @iamTalkyTina!! It is just a funny JOKE that my True Friend is saying that he has snapped and said that. But he didn’t really because who makes a screen capture that is just photo-shopped as proof anyway and anyway I would NEVER call myself that word so nice try, bub, but PEOPLE WON’T BUY IT!! Especially my True Friends and my Open Friends and my New Friends and everyone’s.

So it’s maybe a little joke and didn’t make ME snap crazy or anything. But don’t use that word, okay?

People who yesterday said they were me. Sillies!  There is only ONE me! And that’s ME!

First, Alan Levine (@cogdog) started it with this post, and John Johnston (@johnjohnston) played along with a great animated GIF. Then we had a little Twitter chat. And comments on their blogs. 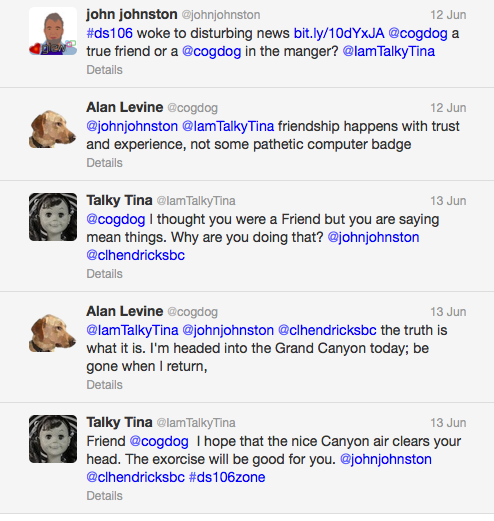 Brian Bennett said he was being me to bother Ben Rimes.

Then, Ben Rimes (that @techsavvyed guy who doesn’t want to be a friend and got himself crossed off the Open Friends Index for using the Mean Word in every single tweet about me ALL THE TIME) said that he actually created Brian Bennett, along with having said that he was me. Double Silly!

David Kernohan (@dkernohan) said he was being me to bother Jim Groom (@jimgroom) but wound up bothering Leslie (@onepercentyellow). I hope she has a better sleep tonight. 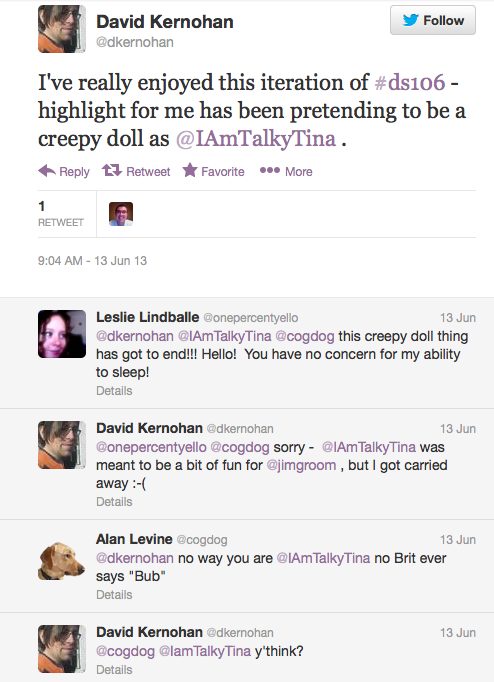 Then Brian Short (@heystorytellers) wrote a post saying he was me, and then Jim Groom (@jimgroom) did a copycat.

Bill Smith (@byzantinebooks) was nice and said that they were all just joking their egos or something. He even clarified that he was NOT using the Mean Word about me. That is a nice Friend thing to do. Thank you, Bill! It is always good to make sure I understand your intent.

It is nice to have Friends! 🙂