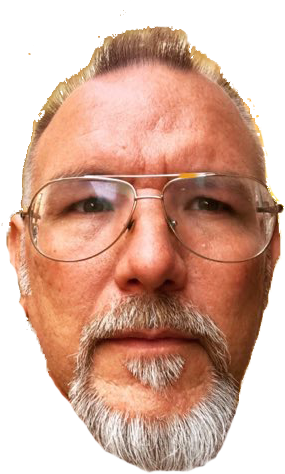 Well, my True Friend John (@johnjohnston on Twitter) is a GIFfriend Master who also likes to teach a computer how to make a GIF for you.

A recent experiment by John allows just anybody to just upload a picture and press a button and make a Dancing Jim one of UNCLE Jim (@jimgroom on Twitter) without any hard work at all.

I decided that I would try it out with a couple of pictures I had left lying around from when I did Heavy Metal Bands for #ds106 True Friends and also Movie Posters Without Any Icons from last time.

Here is what I made with John’s one-click GIF-JIm-Dancing.

Plus, because it has a special place in his heart, here is one where UNCLE Jim is Escaping from New York.

It sure is easy, but it makes the Dancing Jim All Over the World assignment already into an even easier one so that is only one star.

Which might be a short term save for you at the last minute on a Sunday night early on in the course, but it won’t stretch your real skillz, plus it’s not nearly as much fun as doing them the proper way. 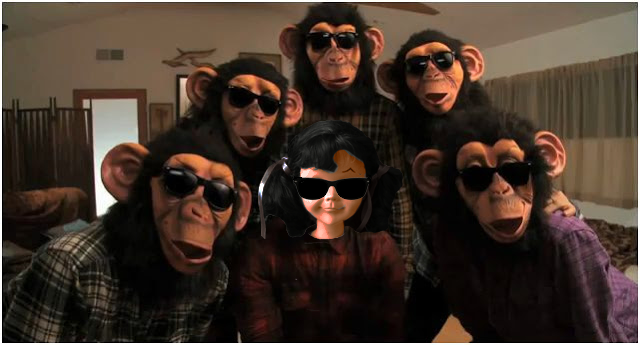 Tina, with Hair, Pigment, and Ray Ban Sunglasses, by @iamTalkyTina

WELL! I am NOT just another Face in a Hole.

But sometimes I think that someone (La kisha Mahone (@LKMahone) not saying any names)  is just stuck on trying to make a monkey of me. Because when I woke up this morning, I was another face in a hole of me and of monkeys from her.

So it reminded me again when I was making a movie (but just a bit part) — but I already told you that story.

So anyway, when I got made a monkey of the second time with the Face in a Hole, I just had to set the record straight again. Plus, make a GIF of it (actually, TWO). Because making a GIF of it makes it even more fun. And two GIFs makes it double the even more fun!

So anyway, up above here is my response to it. Now, I will tell you how I did it without that thing.

First, I had to find the original image of some guy and monkeys (it is always good to attribute your sources) and so I used TinEye, the Reverse Image Search engine to do that. I found 50 results and selected this picture of Bruno Looking Stupid.

Instead of a Face in the Hole one which says Face in a Hole on it, I made one of me with my hair showing (so that I do not look like Thomas the Tank Engine) but I also coloured my hair to match the hair of my actor friends in their monkey costumes (so for that, I used the Colour Replace tool, plus another layer of me where I made the Brightness darker and the Contrast more of it). Then, because they had colour in their faces, I put colour in my face (even though I am from the Black and White TV times) — I can do that as a professional in the business with make-up and the such. I also used the Colour Replace tool for that, too, borrowing some face colour from the other monkeys for it.  Plus, because they were all wearing their cool-kid sunglasses from the set, I am wearing my sunglasses, too (which came from here). So you don’t get any of that hair or colour or glasses with Face in a Hole.

Then, because just a regular picture sometimes needs a little sprucing up, plus for the exercise of making a GIF, plus for the fun and the Art of It, I decided that I needed to add some movement to the image. I remembered that Arthur C. Clarke was on the set that day playing with that bone, so I found this image of it on the Internet.

Then, I put the GIF into photoshop and got rid of the sky parts so that I would just have the tumble bone. I also removed the spaceship part and set it aside so that I could use it later for the coupe de groom. That is like a coup de grace, but with Jim Groom instead, and transportation (that’s the coupe part).

So here is what it looks like when you use the Magic Tool to select something and then use the eraser to get rid of it. You just have the bone left.  (Note, this is just one frame, you have do do it for each frame of the bone in each active layer of it. So that takes a few minutes. But worth it!)

Next up was to insert the 25-odd animated bone frames into my static image, and re-create the situation from when the photo is purported to have been taken — me and my actor buds hanging out, with Arthur C. Clarke in the background practicing the bone scene. Look how surprised they all are at getting their picture taken with me.

Now, that is pretty much enough of it, because that is my @iamTalkyTina picture, plus a GIF the bone in the background. But remember, there is a coupe de groom coming up.

So back to the bone-spaceship GIF where we set aside the spaceship part for later? Now we get that back out and add in some Dancing Jim Groom from the Dancing Jim All Over the World assignment (Animated GIF Assignment 1001) and make it kind of like Slim Pickens in Dr. Strangelove or How I Stopped Worrying and Learned to Love the Bomb but with Jim Groom instead and on the bone-spaceship instead of the bomb.

So that is what can come from invoking me, @iamTalkyTina in a blog post. Or if you make a monkey of me. And it shows just how much learning can come after a simple Face in the Hole.

As soon as I saw this one in the Assignment Bank, I just knew this had to be next on the agenda for the August 2013 Animated GIF Challenge.

UPDATE: Click on the GIF to hear Jim’s dance music! (Thanks, John!)

I’ve been expecting a lot from our dear UNCLE @jimgroom over the past while, and am still waiting for him to address his significant Art Lack. Todd kept saying, “No Art from Groom” over and over, and it wasn’t until yesterday that I got a good enough feed from his blog to confirm that the Art Lack remains significant. However, despite the Art Lack, UNCLE @jimgroom has been posting a lot of writing bavatuesdays.com recently, and he makes some compelling cases for a whole bunch of stuff that is worth reading. So even though the Art Lack continues, his brain seems to be working okay. So there is that.

But he does need to crawl back out and Make some More Art, bub.

My True Friend John Johnston has rocked the Assignment Bank with Animated GIF Assignment 1001: Dancing Jim All Over the World — but so far only 2 ds106ers have shown the assignment some love. So the ds106 Community needs to step up and address that!

While I had thoughts of doing a “Where the Hell is Jim?” with Jim dancing in all the locations Matt does, in the end I decided to do an animated poster to celebrate Jim’s enthusiasm for #ds106.

I found some art for the original Rocky Horror Picture Show on the Google images. I had the greatest success searching fontspace.com for fonts with the tag “blood” and in the end selected Rocky AOE by the Astigmatic One Eye Typographic Institute as the best match for my poster.

I also tidied up John’s original dancing jim groom template file by removing vestiges of the microphone chord — now the Bava dances with a wireless mic in his hand in the modified template file.

Yesterday’s response to Animated 2013 GIF Challenge #1: GIF your Headless Self was good, with contributions from @RockyLou22, @Todd_Conaway, @heystorytellers, @bennettscience, and @byzantinebooks. Did I miss any?  But I know we can wake the #headless13 #ds106 Community giant even more in preparation for the official start of the fall 2013 headless ds106.

Make sure to tag your posts according to the usual Assignment Bank requirements, and your August 2013 Animated GIF Challenge contribution will syndicate through to the corresponding Assignment Bank page so we can easily track the responses. And be sure to tweet out your post, too!