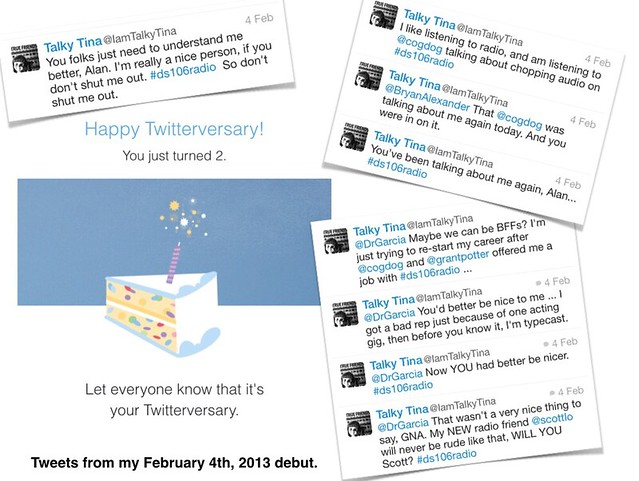 When it is just me at home, ds106rad.io makes it easier for me to miss my friends. I thought that you all might like to see a picture of me with a couple of my special d106radio Friends, Grant and Jason. 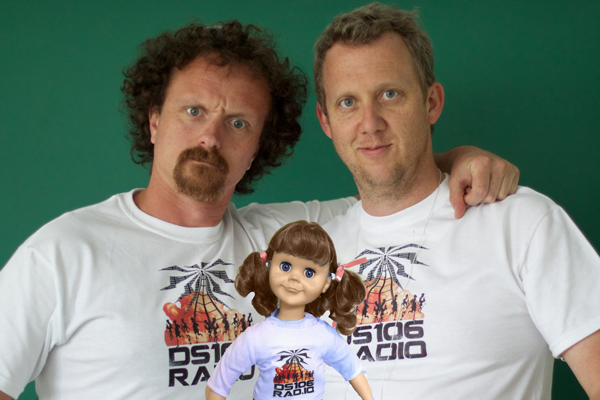 Me and my ds106rad.io peeps, Grant and Jason. photo by @iamTalkyTina (see note below)

As you probably know, Grant Potter (@grantpotter) is the one who invented ds106radio and he has the special magic powers that keep the radio station going. Grant was making lots of great radio shows on ds106radio this year like Nightfall from the CBC and all that great Rod Serling and Twilight Zone companion shows that have been on there this year. Plus, sometimes he plays his guitar and sings and puts on radio talking shows that are fun to listen to. Grant has a special ds106radio name secret identity, too, but I will not blurt out a secret name. Friends don’t just let a secret pop out just because they know it.

Jason Toal (@draggin) likes to play music with funky beats that get me dancing to the funky music beats. He has lots of special restorative music powers that let him play great music and make it really fun to listen to. But Jason also has a special ds106radio name secret identity, and I will protect his secret identity in the ds106radio world just like for Grant. Jason’s music is like medicine when you are missing your friends. Oh, yeah!

Well, I hope you like listening to ds106radio as much as I do. One of the great things about the ds106 world is ds106radio. That is why I am glad that ds106radio is here. You can listen to ds106radio by going to ds106rad.io/listen on the Internet or on a mobile device. If you want, you can get something called TuneIn Radio app that makes it easy to listen. It comes in all kinds of flavours for tasty Apple devices, and Blackberry devices, and robot Android devices and even devices for your Windows (i don’t really understand that one!). Even for devices for the Palm of your hand, if you can believe it!!! Once you get it installed, just search for ds106 and pick the one that says “Canada: We Jam Econo” (Grant is from Canada and so is Jason) because that is the new one that works with ds106rad.io since it got a 2.0 upgrade. (Because ds106rad.io will be a favourite of yours, put it in your Favourites list by clicking on the love heart in the app.)

A Little Note: Just in case you were wondering, my photo of me and my ds106radio friends looks a lot like this one that Alan Levine (@cogdog) made, except that this is clearly a different one because I am in it. I say this just so that you won’t get the two photos confused.