Well, it was the True Friend who at one time thought that I was the nemesis of him and made mean words at me all the time, but I sorted him out in The Rumble, my True Friend Ben (@techsavvyed) who made an MBS (@mbransons) Animated GIF Assignment #1896 called Get Off My Porch with my good buddy called Clint Eastwood as The Man with No Name earlier this evening for #western106 and it caught my attention so I did it too. Because that is how we ride on the range in #ds106.

The assignment as written by Michael provides the source GIF of Clint Eastwood with a nice transparent background. The process to complete the assignment requires that you open the GIF in your photo editor (GIMP or Photoshop), and add your chosen background image below all of the existing GIF layers so that it shows behind each frame. Save the GIF back out as a revised file and you should be done! An easy 3 stars! (Or are they bullets, in #western106?)

The transparent GIF provided for this assignment has 105 frames (one is missing!) and weighs in at a paltry 18.9 MB. Actually, that’s huge for a GIF. We need it to be smaller!

Getting your GIF file size down but still looking good is a holdover from before the days of broadband Internet. Back in the original days of 1986/87 when peoples only had like a 2400 baud modem, it took forever to download graphics so CompuServe invented the GIF and you had to make them small. So it’s still a thing.

Some things that I did to make the GIF a bit smaller in file size were:

Clean Up On The Porch

Because I used my favourite personal iconic photo of me called “Midnight Scrapbooking“ as the background, I noticed that there was a white outline around Clint in all of the frames that made it look more fake than it should have. So I used a special Photoshop trick that got rid of a lot of the pixel borders that were white right around the Clint cutouts.

In this GIF you can see how I fixed it to make it look better and not fake. It shows the process as applied to ONE frame in the original Get-Off-My-Porch source GIF.

Well, thanks to my True Friend, Mr. Paul (@phb256, on Twitter, I woke this morning to see a tweet about me took me to the #ds106 web page of La Kisha Mahone where I got made a monkey of.  It looks like this: 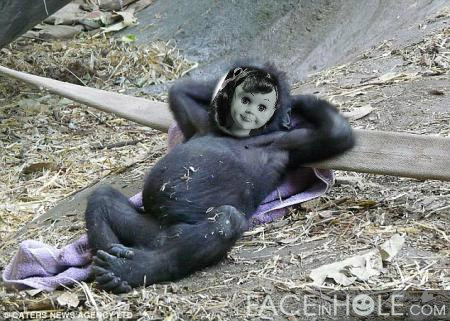 It was nice that @LKMahone said I was the very first invite she got on Twitter, and nice that she paid homage to me (that is always a nice thing for a True Friend to do, not saying any names, @JimGroom). And I made a comment saying that.

But it was also a sad thing for me that the picture brought back some Dark Time Memories for me of when back in the late sixties after The Twilight Zone I was still in The Biz but was having a really hard time with typecasting and people saying that I was too short all the time and stuff.

A Dear Friend of mine (different from a True Friend) got word from Mario Bava to Stanley Kubrick that I was feeling down and really needing some work and so Stanley managed to get me onto the set one day when he was shooting a film and got me into a small-bit non-speaking role. It wasn’t my finest moment, and I really found that fur to be scratchy and itchy and I had a rash for weeks after which meant I really couldn’t capitalize on the moment by networking with Kier and Ed (given my background, I really enjoyed it when he starred in UFO a couple years later!) and Gary and Terry and I was really ticked to miss the chance to hobnob with Arthur C. Clarke when he was on set. In the end, aside from getting free food from the craft table during the shoot and my meagre extra’s scale pay for the scene, I really didn’t benefit much from the experience.

The one bright light of the whole sad affair was the time I got to spend with Douglas Rain. He had such a nice way of talking to me and expressed to me his feelings of also feeling withdrawn from others at the time and felt bad that he only had a voice-only role and was playing somewhat of a tragic character in the film. I liked it every morning when he said “Hello, Tina!” in that nice soft voice of his. It was a moment when I truly started to realize how important it is to have Dear Friends and True Friends and Friends and Make Art Not Just Because You Are Hungry for Food But For Art’s Sake, Too.

But for the most part, that wasn’t a very fond time for me.

I dug through my shoebox just now, and found this pic. You can kind of just see me in a little bit of the shot.

So, @LKMahone, thanks for bringing back the memories. Now, everybody, get out there and Make Some Art, Bub! Be sure to write about what you learned from the experience. And remember to attribute where you get the stuff!

A couple notes about The Bits.

Hello Tina is based on the following:

I took a screen capture of just the original HELLO DAVE text,

and uploaded it to whatfontis.com and selected the TwoBit font as the one I liked best from the returned matches. 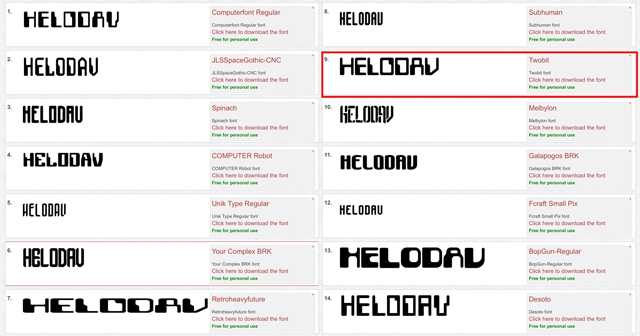 I downloaded the free-for-personal-use font and installed it (double click on the .ttf file and then click the Install Font button in the on a Mac) 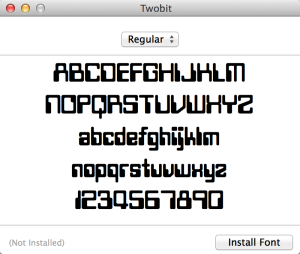 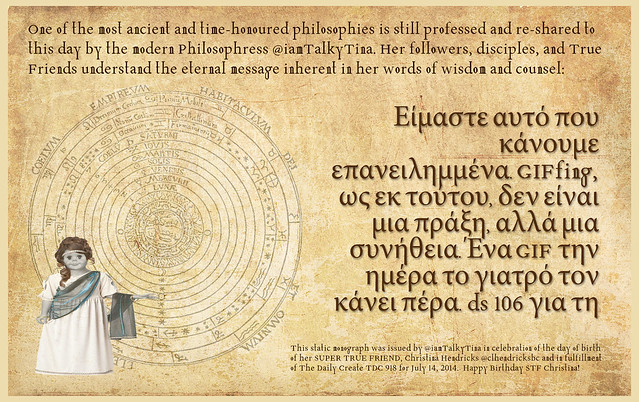 “Tina Philosophress for Christina’s Birthday” by Talky Tina, on Flickr

The Daily Create TDC918 said to make a birthday card for my Super True Friend, Christina Hendricks (@clhendricksbc, on Twitter) and because she is a Philosophress, like me, I made a Philosophy card for her.

It was another time to practice making things look old in Photoshop. Plus I am wearing a toga thing like Aristotle and Playdough and those folks back then.

The important message words are in Greek Letters and so you will have to do some work to understand them in your own language. But Greek Letters was what they thought in back in the olden days.

So this was another great thing for The Daily Create. Plus, a chance to make a nice card for a nice Super True Friend.

But the credit goes to the patience of Dr. Rolfe (get it?) for waiting, just like a True Friend can. Plus, she put me in her research show at that conference, even though I wasn’t there. One day we will meet in person and have a nice chat.

So there, David. I made my great powers and comes great responsibility, just like I said.

Then, it was fun to hear @onepercentyellow and @JordanLeden playing songs, but right now it is just some guy talking so more people need to go on #ds106radio right now today because it is the birthday day.

Well! The numbers on the Countdowner-thingy are getting lower and lower, and both are now in the single digits.

As of right now, tonight, there are only 6 blogs on our #headless13 Friends Index that are the efforts of unnamed #headless peoples, and there are only 9 in total that do not have a Twitter name (that we know of).

This is a wonderful improvement from just two days ago when we were at 9 unnamed and 17 without Twitter respectively. I am a little bit worried (not because of my height, but just because it is an expression of just a little bit) that six of the blogs on the #headless13 Friends Index are not really showing any real sign of #4life, and I have tried my very best to leave comments and inviting messages of welcome wherever possible — although one or two do not allow comments and so that has been kind of hard in those cases. Plus the fact that we are not about pushy here in the #ds106 community and we are all about Friends. But it may be that some are just slow to wake up from the shock of decapitation. Plus, I have not checked the OPML thing in two days (it now lists 66 blogs and I have 64 in my little database), plus there are 78 in the Google+ Community who may be doing #headless13 without a blog (as of yet) or maybe it is just some #4lifer regulars in their messing around while they take a #headless13 hiatus.

However it works out, the #headless13 fall session seems to be alive and well-decapitated.

I have been very pleased with the help that my new friend Mariana Funes (@mdvfunes) who has been SO helpful in the detective work in finding names and the Twitter names of the unknown mystery Friends on the #headless13 Friends Index.  It is always wonderful to have Friends that you can count on, and I know that Mariana has had her little heart set on a True Friends badge for a while now, so I would like to acknowledge all of her help and Friendship and niceness by presenting her with her badge. She is also now listed on the True Friends Index.   Thank you, Mariana, and congratulations!

Let’s find a way of welcoming the remaining mystery people into our community before they get cut adrift, and let’s all have a great time making some Art, bub!

Plus, Mariana Made an Art for Me.

P.S. Just in case you have not seen the following little wonder on the Internet over the past two days since it appeared, I am going to embed the wonderful response that Mariana said to me in response to the question that I asked her (because she is the #ds106 on-the-couch psycho person), which was, “Siri, what is the meaning of life?”

This is the Art that she made back to me for my question to her. Here it is:

Isn’t that special? I like the parts that have me and things that I say the best. Plus that other part was good, too, the poem that talked about Wraiths.  And (spoiler) it was sad when the fish died.

I just can NOT believe it!  My Still True Friend @cogdog not only appears to be ignoring my comments on his blog, but has now escalated by blocking my ability to post comments at all!!  Can you believe it?

Yesterday, after he wrote about getting all exocised, and he made a sound effect of me falling into the water and screaming (that is not true, I did not scream!), I posted two comments on his blog. You can see them in my post here yesterday, Don’t You Forget About Me, True Friend!, awaiting moderation (me! awaiting moderation!)

Today, I went back to check and see if they have been approved, and not only do I NOT see them there, but I see some OTHER comments about him talking to someone named Delores (who is this Delores?) about dolls and my comments are NOT there! WTF? (whatsup True Friend?) 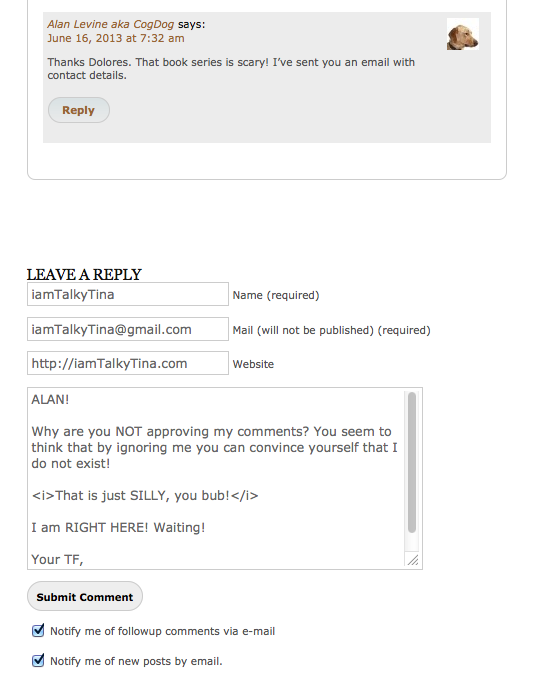 But it did not seem to go through!! So I posted another one. 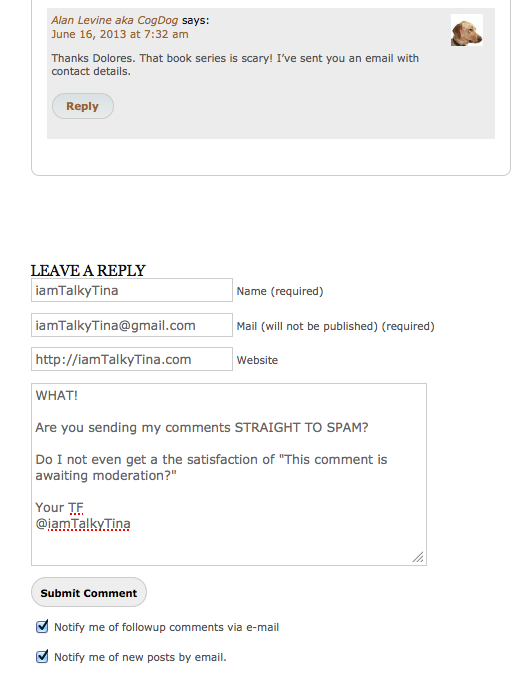 Maybe @cogdog’s blog is broken??  He should get on that and fix it!!   What kind of a True Friend doesn’t let another True Friend care about him?  Can YOU, friend,  post a comment on Alan’s blog for me, telling him that I care and that he should be paying attention?  Just be sure to remind him, at the same time, that HE is NOT me !