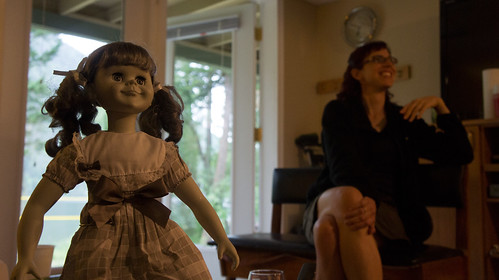 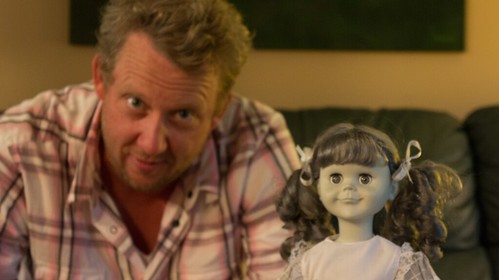 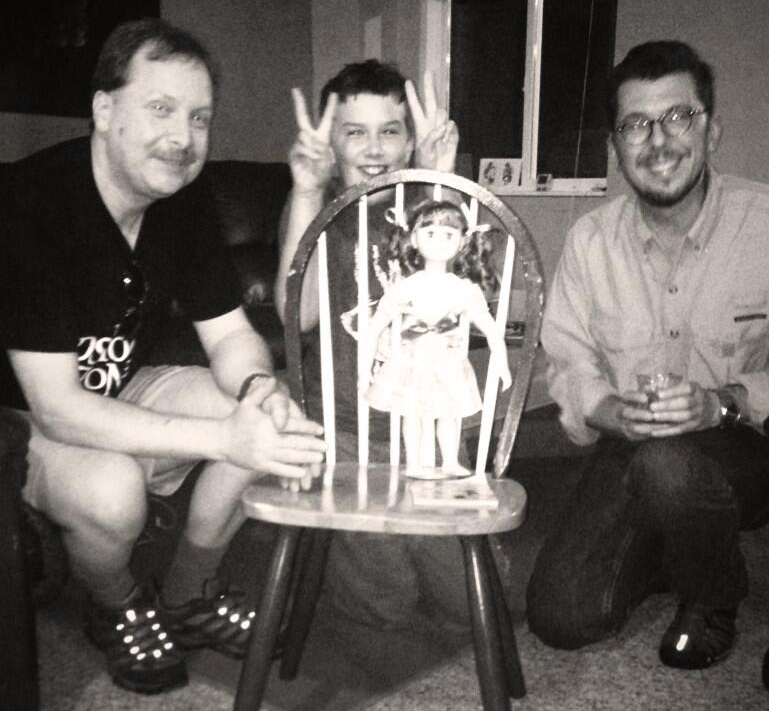 Earlier this year, in February, 2013, @iamTalkyTina began interacting with the outside world after a hiatus of many years. In the months leading up to today’s date, she made a number of “Friends” via twitter, this blog, and the ds106 #ds106zone community.

This evening, @iamTalkyTina was returned to her cardboard box. 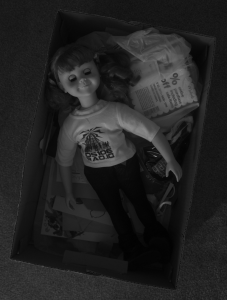 “@iamTalkytina: Back in the Box”

Some will question the rationale and reason behind her sudden departure from ds106, and ask about her abrupt return to the box. In all honesty, and without apology, some will find the answers to their questions to be lacking. It is not the intent of this author to provide solutions or guidance to Tina’s “Friends,” nor will all be explained in the coming passage. However, you may find some consolation is some of what is to follow.

First, you may wish to review my previous guest post on this blog, entitled My Fair Tina, which outlines a good deal of my rational behind my involvement with @iamTalkyTina.

Second, you may take some solace in the fact that @iamTalkyTina is safe, within her cardboard box, in a secure and comfortable location, somewhere within close proximity to a regulated facility where regular monitoring of her status occurs. If you wish further details, see the information provided at the end of this post.

As to her departure, shall I simply re-state my comments made earlier this evening as reported in the media, “the ds106zone is over, Groom himself hasn’t made any Art in weeks, and @iamTalkyTina had just outstayed her welcome.”

I will not comment a recent series of Twitter-uttered and blog-posted statements made by one member of the ds106 community about “grown men playing with dolls.” Such statements are nothing but inflammatory and are not respectful of the long tradition of puppets, figures, dummies, stand-ins, alternate personalities, mirror characters, foils, alternates, nom de plumes, etc within the historic span of storytelling in all of its many and various forms. Plus, other ds106 people have dolls, .

I will not comment on the well self-documented and drawn-out period of mental aberrations referenced by @cogdog due to his preoccupation with @iamTalkyTina in late June, nor comment on the fact that since his “trip to the canyon,” he has refused to approve or publish any of her comments posted to his webblog, cogdogblog.com — not even appearing to see or hear any of her Tweets.

I will not comment on the recently self-proclaimed stresses and appeals for a return to wellness that #ds106 course guru “UNCLE” @jimgroom has been sharing — noting only that he too has once again taken to claiming once again that “HE is @iamTalkyTina” and that “she completes him,” and that “HE does not need to do any new ds106 Art because SHE is HE and if SHE is doing it then clearly HE is and so HE does not need to do any.” After about ten syllables it starts to just get really weak and the result is that @jimgroom is getting a free ride off of @iamTalkyTina right when he needs to be getting back on the Art horsie and riding around the Art range corralling some new Art doggies.

I will not comment on the many and various other #pretenderTinas that appeared — Tina took them all to the cleaners in the Rumble. And as for that “other” rogue Tina that appeared in mid June, @RealTalkyTina — ha, ha, that four-tweet lifespan went nowhere. Heck, even I, @PuppetMaster106, have more than four tweets to my Twitter cred.

I will comment, however, on the question as to whether I, @PuppetMaster106, will now increase my web presence now that “the @iamTalkyTina character has been put away.” On this question, I have this to say, and you may quote me:

This talk of a ‘headless ds106’ this fall is all well and good, but you know that someone, somewhere, needs to be always at work behind the scenes, keeping things ticking, poking and prodding, feeding the unicorns, and all. And since I’m experienced with webs and scenes, and strings and such, there’s certainly a role for me in the coming months — whether it’s visible to the ds106 community, or not so visible, and rather behind the scenes.

And as to that little mention of unicorns just there, and whether that might in some way identify me to my ds106 friends, well, I’m smiling and have just this little closing comment — “Yeah, I just threw that in as a little red herring subterfuge.”

So, @iamTalkyTina is Back in the Box. And for the next while, I will be on hiatus. But I will not be far from the ds106 stage. The curtain will soon be rising, and the show will go on.

Final Notes on the State of @iamTalkyTina

“@iamTalkyTina: Back in the Box, Three Layers Deep”

In addition to being housed in a secure and comfortable location, somewhere within close proximity to a regulated facility where regular monitoring of her status occurs, @iamTalkyTina is resting comfortably within her cardboard box in a quiet and well sound-proofed location. Her sleeping compartment is encased in sub-zero ice-packing to keep her well protected from any untoward movements, and this ice-packing is, in turn, encased within a level four prototype Carbonite shield. These three layers (cardboard, ice, Carbonite) are intended to isolate @iamTalkyTina from any external disturbances that might upset her.

She is resting in comfort and quiet, and we are quite hopeful (VERY! hopeful) that nothing will disturb her.